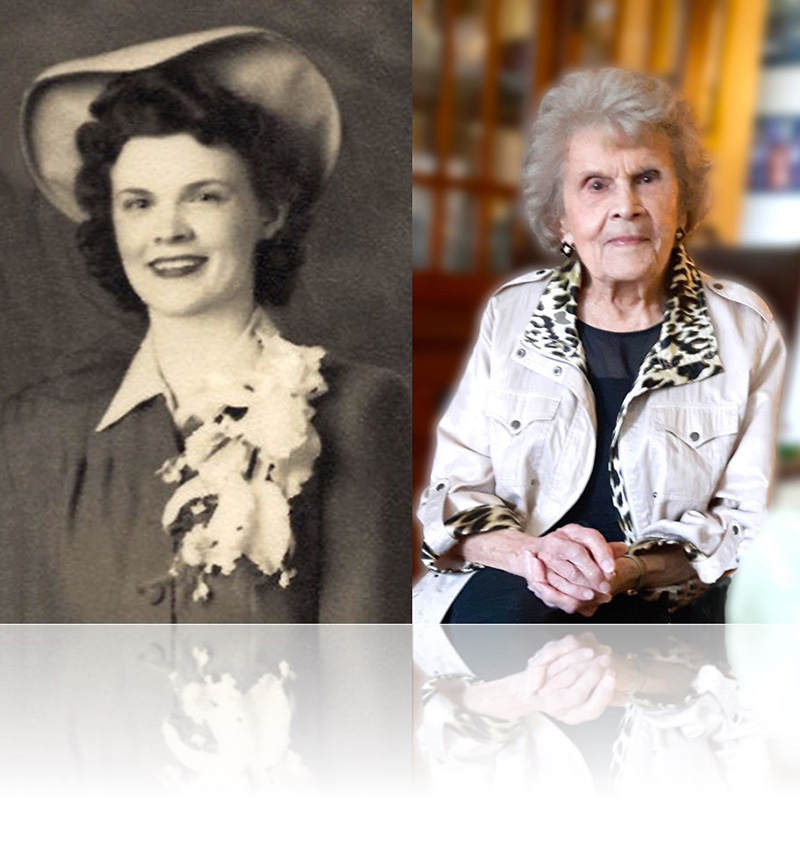 
It is with sadness we announce Lillian’s passing on January 26, 2020 at Royal Columbian Hospital. She fought hard at the end and lost the fight just shy of her 98th birthday. She was both a beautiful person outside and inside. As she said in the last few days of her life “I’m ready now to start my next journey”.

Survived and much loved and admired by her daughters Sherry Bell and Karen Scully and her son-in-law Paul Scully along with her grandson Nathan Bell and his fiancée Michelle. Great grandson Braidon Bell always made sure that she safely got from one spot to the next in her home and she adored him. Lillian also leaves behind her sister, Anita DeCaigney, and several nieces and nephews. The much beloved family cats were a huge part of her life and gave her great comfort and amusement.

She spent a great amount of time with her grandson, Nathan. They formed a very special bond and he will cherish the love and memories she left him with and of all their talks and adventures together.

Lillian grew up in Mallairdville, BC and memories she often spoke of were of a happy childhood that included many crazy activities including running on the top of boxcars, running over log booms and several other activities that most children no longer do. A gift of an orange in a stocking or a ribbon for her hair at Christmas were treasured items in the 1920’s and 30’s.

She met her husband at Scott Paper and laughed often as she recalled how he showed her how to roll toilet paper faster on her first day of work. At the end of that first day her future husband went home and told his mother he had just met the most beautiful girl he had ever seen and she was going to be his wife. Lillian was not aware of this proposal on her first day of work but his mother made sure she knew of it down the road and smiled as she told her what he had said. Shortly after she turned 21 they married.

Alex and Lillian travelled to their new home on the airbase in the prairies the day after their wedding where her new husband’s new job was a Flight Office with the RCAF. She had many fond memories of those years and the friends they made and the good times they had together.

Lillian worked for a major insurance company for a number of years as a sales representative with their group income replacement department. The groups she was responsible for were both the nurses and professional engineers. She enjoyed her job immensely as it offered her the opportunity of meeting so many people.

She met Jerry Bernhart and they had a life together that was filled with fun and adventure. They loved their dog Smokey, their boat and the little log cabin that they built together at North Lake on the Sechelt Peninsula.

Gerry worked at the Earls Cove ferry terminal. Lillian along with daughter Sherry decided to go into business managing the restaurant at the ferry terminal, Connie’s Inn, until Gerry’s death. Their fish and chips were a hit along with several other very tasty items on the menu.

Lillian had a great curiosity for everything throughout her life and was never afraid to try something new. She taught her children life skills that have helped them better themselves and survive the pitfalls of life. She will be dearly missed but will be in our minds and hearts until the day we join her on our next journey.