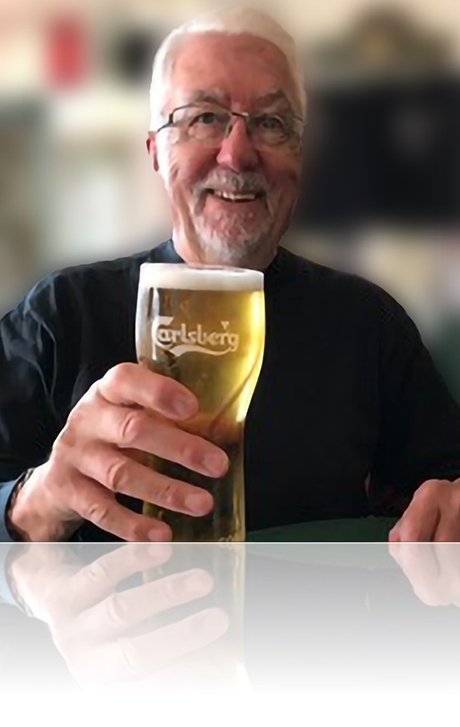 
It is with sadness that we announce the passing of Gordie Larkin on January 7, 2021 due to COVID-19. He is survived by his wife and partner of 18 years, Barbara Larkin; son Keith Larkin (Sky); adopted daughter Kecia Larkin; stepsons Clayton (Heather) and Andrew (Megan) Shannon; grandsons Akira and Fox Larkin and Henry and Emory Shannon; beloved cats Rosie and Charlie; and his extended network of friends, colleagues and fellow activists from both Labour and the NDP.

Gordie was born and raised in Vancouver, the only child of Ray and Beth Larkin, who pre-deceased him in 1982 and 1998 respectively. The family unit was very close and Gordie cherished the memories of his parents; learning to play the guitar and sing with his father and he exemplified the energy, political passion and love of life that were the hallmarks of his mother’s character.

Shy as a child, Gordie’s mother hoped to bring him out of his shell by enrolling him in elocution lessons. He would go on to win public speaking competitions, act in John Oliver High School plays, Kitsilano Showboat productions, CBC dramas, sing in the J.O. choir and ultimately graduate from the Theatre Program at Vancouver Community College. While brief, this skill set ultimately led Gordie to a stint with CKWX Radio and he often stated, “I never met a microphone I didn’t like!”

His father Ray was an Ironworker, who worked on the Second Narrows Bridge prior to the fateful construction collapse. His father’s sorrow at the loss of life of his Union Brothers had a profound impact on then 16-year-old Gordie, leading to his lifelong attendance at annual memorials and supporting a steadfast campaign for renaming the Ironworkers Memorial Bridge; a goal finally realized in 1994.

By the late 1960s, as a new father and in search of more lucrative work, Gordie began working on fishing boats along the coast of BC. His time at sea has been forever immortalized in the song “Santa Maria” by Trooper. It was on this adjacent vessel, that he and a few band members joined the crew aboard for an evening. According to Gordie, it was “just another night on a sardine boat”, but clearly one which provided considerable inspiration for the band.

Gordie became active in his union during his fishing years, joining the United Fishermen and Allied Workers, which later became part of Unifor. His time there included an elected role on the Bargaining Committee - a responsibility where his public speaking skills and innate understanding of working life proved invaluable.

In 1978, “Brother” Gord Larkin began working for the Canadian Labour Congress, initially assigned to all manner of disputes, organizing drives, political action efforts, United Way campaigns and union education programs. The latter assignment is most notably remembered at the annual CLC Pacific Region Winter School, where his personality and musical gifts truly shone and were sorely missed upon his retirement. In 1992, he was promoted to Pacific Region Representative for BC, allowing for a slightly more settled life in the national labour organization.

Gordie was passionate about music and used song to protest injustice - many considered him to be BC’s labour troubadour. The roots to his musical activism can be traced to his involvement in the “Advanced Mattress Coffee House” from the 60’s. His memory for lyrics was as phenomenal as his clever wit, especially when using his musical gifts to honour and ‘roast’ his friends and comrades. With his band, The Rumble Street Boys, Gordie was a frequent performer at Legion #179, Edmonds City Fair & Classic Car Show, Hats Off Day, and The Korean Cultural Heritage Festival, playing a mix of R& B, Blues and Rock-a-Billy.

A long-time resident of the City of Burnaby, Gordie was active for many years in the Burnaby Citizens Association, forwarding the progressive municipal organization through numerous successful elections, before stepping down as President. He was a volunteer for Speed Watch, BC Cancer Daffodil Campaign, Legion Branch #83 (Executive), a United Way Rep and was proud of his service on the PNE Board, Racing Commission and Board of BC Ferries.

Every Christmas Eve for over 25 years, Gordie could be found at the Annual Labour Community Christmas Dinner at The Maritime Labour Centre, serving up turkey dinner and handing out clothes, toys and hampers of food to deserving families in the Downtown East Side, on behalf of the BC Federation of Labour.

Gordie was well known for his love of cooking, and never happier than when dishing up gumbo, pulled pork or a deep-fried turkey for his family and friends. He put a lot of heart into everything he made and cooking for others was his way of showing he cared. Retirement meant more time for these culinary creations and regular golf games. Given the frustrating nature of golf, it is gratifying to know that the last full round he played was his best ever. His all-time favourite travel spot was New Orleans, and he loved football - especially his Saints. Gordie was a longstanding seasons ticket holder for the BC Lions, attended Vancouver Canadians games regularly and loved watching the “ponies” run (betting not unheard of). Mexico with “the herd” was a hotspot he came to enjoy post-retirement.

No single tribute could properly describe the reach of Gordie Larkin’s life. Like the ripples on a pond, his spirit touched unnumbered thousands. He was indeed a loving husband, father and grandfather, and none would deny he was a principled social activist. An ardent campaigner for Democratic Socialism and the Labour Movement, Gordie was the troubadour, mentor and “stand-up” guy one could always count on. In all his relationships, loyalty was his creed and joyful humour his calling card. A fellow traveller to all who believe in a better world, we shall not see his like again.

Due to the ongoing Pandemic, we will not be holding a service at this time. His family asks that you please leave a message of remembrance on this page.


As Gordie was active in many charitable organizations throughout his life, in lieu of flowers his family would request that you consider a donation in his name to one of the following charities: