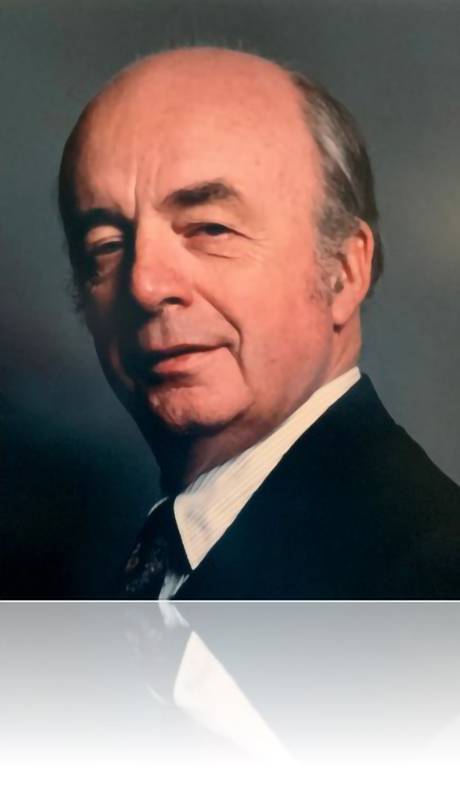 Seating may be limited. Please click on the image link below to RSVP.

If you would like to share an anecdote or picture prior to the event, please send Neil MacDonald an email at: neil@cheakamus.com. 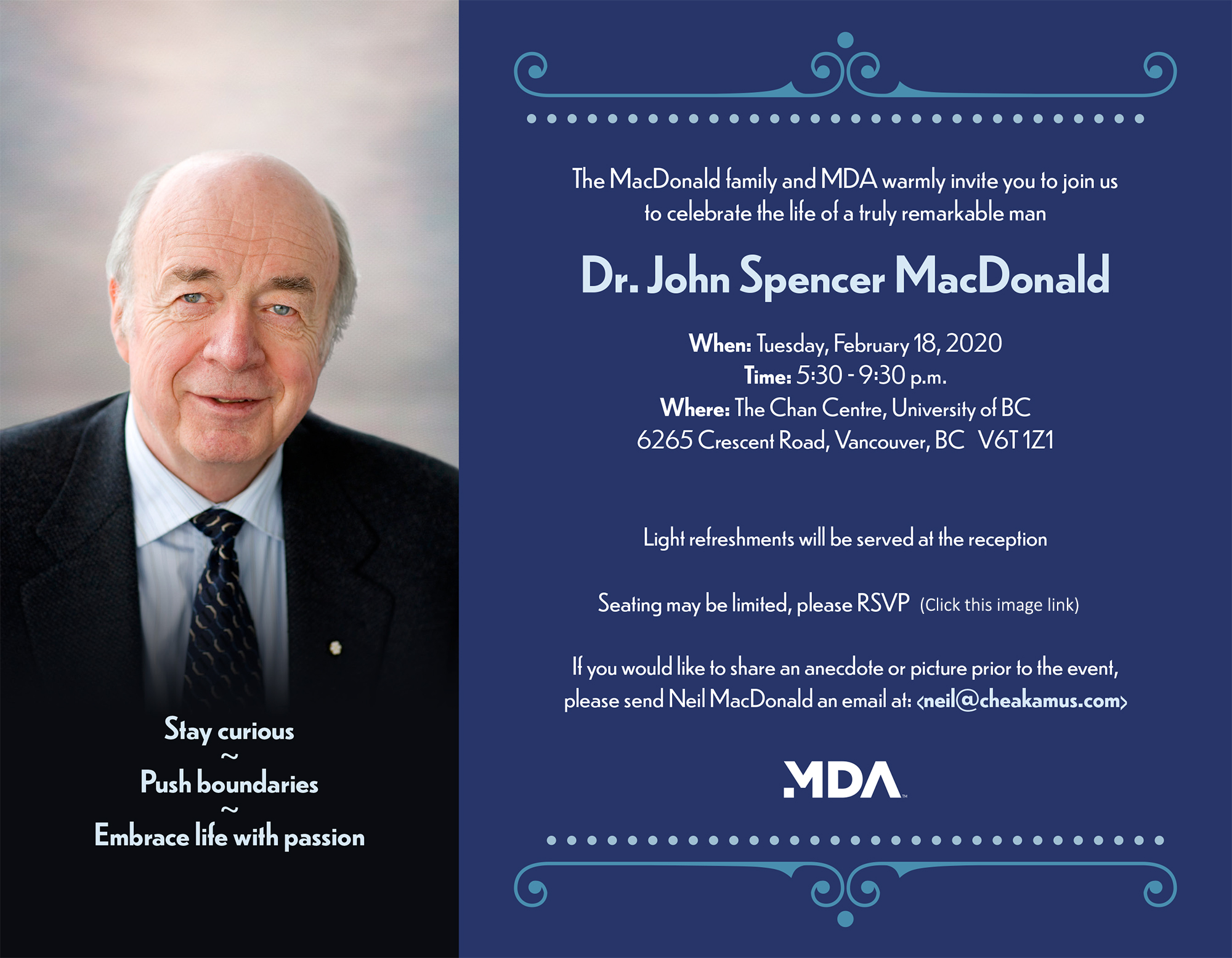 
Canadian aerospace pioneer, engineer, academic, loving husband, and gentle father, John Spencer MacDonald, O.C., Ph.D., F.C.A.E., P.Eng, IEEE-FL, passed away peacefully on 26 December 2019. The only child of Alice and Neil MacDonald, born in Prince Rupert, British Columbia, on 13 August 1936, he demonstrated an aptitude for electronics at a young age repairing marine radios for the local fish boats while in high school. John obtained his undergraduate degree in Applied Science from The University of British Columbia (UBC) in 1959. He was accepted into the post-graduate engineering program at the Massachusetts Institute of Technology (MIT) where he earned his master’s degree in 1961 and his doctoral degree in 1964 and thereafter was appointed to a teaching position at MIT.

However, he loved his homeland more. Together with his wife, Alfredette, and two young sons, Neil and Jay, John returned to Vancouver in the fall of 1965 to teach electrical engineering at UBC, his alma mater.

In 1969, John co-founded MacDonald, Dettwiler, and Associates (MDA), an aerospace, information systems, and technology company. He served as President and CEO of MDA until 1982, and as Chairman of the Board from 1982 to 1998, at which time he became Chairman Emeritus. In addition to professorships in engineering at MIT and UBC, John served in an advisory capacity to various governments and on the board of directors of numerous companies. He was a Fellow of the Canadian Aeronautics and Space Institute (CASI) and a Founding Fellow of the Canadian Academy of Engineering (CAE) and has received many awards for his contributions to the technology industry including the British Columbia Technology Industry Association (BCTIA) Impact Award for Person of the Year in 2008, and the first ever given Air Industries Association of Canada (AIAC) Life Time Achievement Award in 2018. In 2001, based on his observation in RADARSAT imagery of shrinking Arctic sea-ice due to climate change, John co-founded Day 4 Energy, a solar energy technology company, and served as its CEO until his retirement in 2014. From 2010 through 2016 he served as the Chancellor of The University of Northern British Columbia (UNBC).

Dr. MacDonald was teacher to hundreds, mentor to many, and friend on all seven continents of the earth. For those who knew him well, he will be remembered for the constancy of his friendship, his integrity and loyalty, and for his true smile, honest laugh, and booming voice.

John is survived by his loving wife and partner of 60 years, Alfredette, by their two sons, Neil (Ashly) and Jay (Kristin), and their three grandchildren, Lochlann, Tyne, and Tristan MacDonald.

A celebration of life reception for all of John’s family, friends, and acquaintances will be held at a date to be announced. In lieu of flowers, the family asks to please consider a “Memorial Gift” donation to the Alzheimer’s Society of British Columbia (www.alzheimerbc.org) in memory of John Spencer MacDonald. 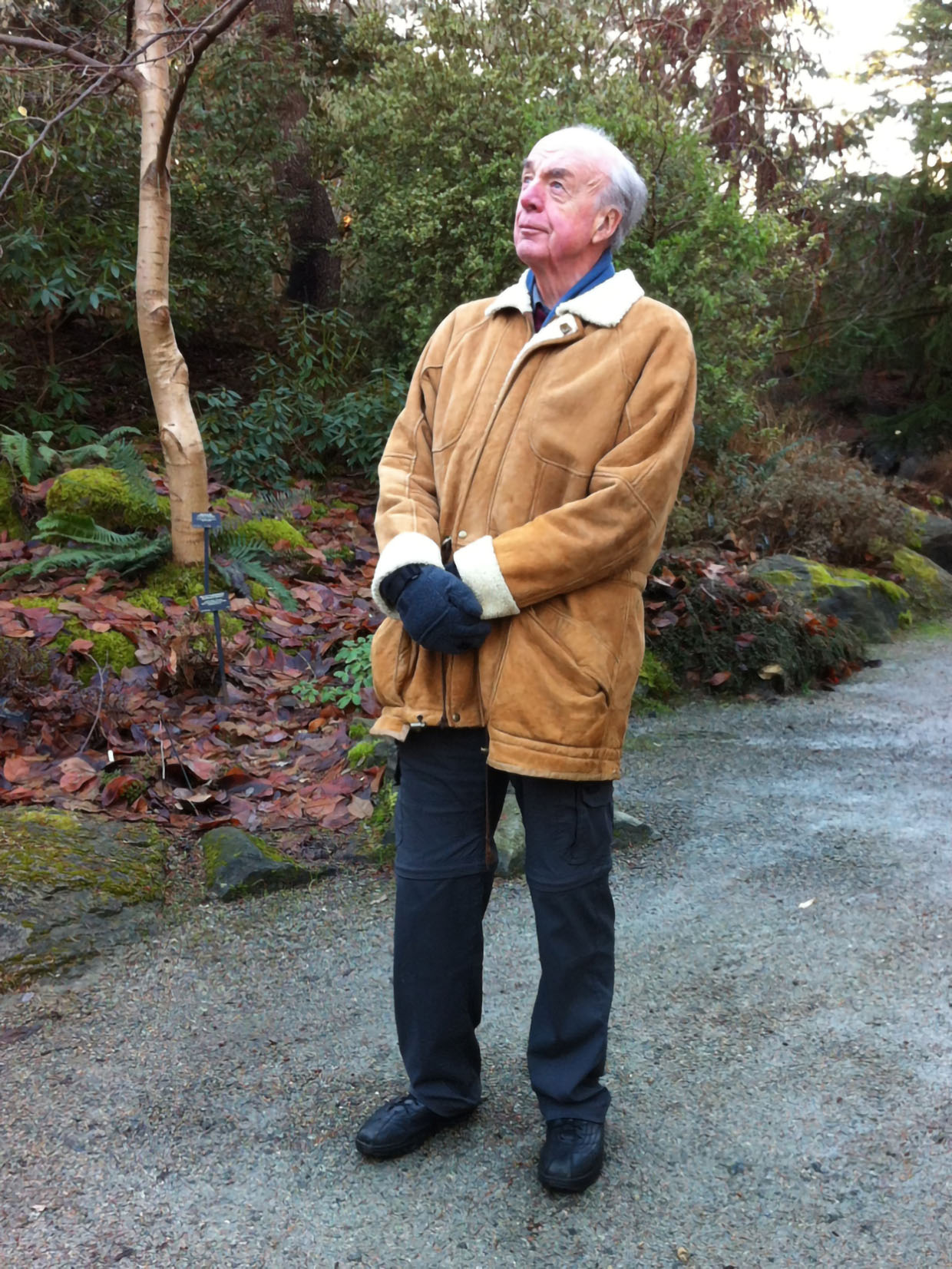